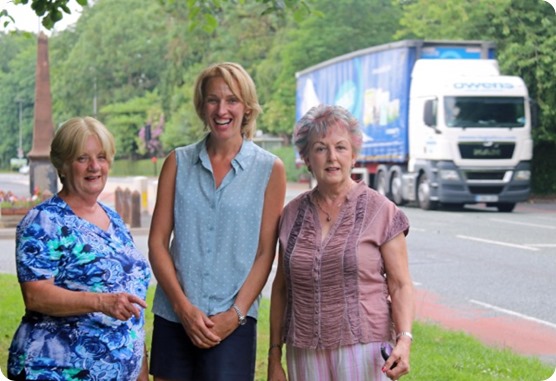 Following on from the recent speed limit reduction from 40mph to 30mph on the A534 Crewe/Nantwich Road, Cheshire East Councillors representing Wistaston and Willaston & Rope Wards, Margaret Simon, Jacquie Weatherill and Sarah Pochin are now asking for action to be taken to remove HGVs from it. The road is currently a Primary Route which sends strategic through traffic along the Crewe/Nantwich Road and past Crewe Station. The completion of the Crewe Green Link Road will be a real success story for Crewe and they want to capitalise on its benefits.  They want the road to be de-primed.

Over the last few years the number of HGVs using this road has dramatically increased and this, in turn, has badly affected the quality of life of the residents who live along it.  They have continuously lobbied their Councillors asking for their help to reduce the number of HGVs by encouraging them to use the A500 by-pass instead when they travel through the Crewe area.  These heavy vehicles often travel in convoys during the night.

"We have a golden opportunity, right now, to make a difference to the lives of our Crewe Road residents.  Now that the Crewe Green Link Road is underway, this is the time to get more signage in place and direct the HGVs off this road and on to the A500.  It would improve things for everyone living along and using the A534 from the Peacock Roundabout right up to Crewe Station."

"Our residents are fed up with the noise from these vehicles and the sheer weight of them causes vibration to many of their properties.  When the HGVs are travelling in convoy at night the continuous noise wakes them up.  They shouldn't have to put up with it.  Once the Crewe Green Link Road is open we will be actively encouraging local hauliers to stop using the A534 Crewe/Nantwich Road and to use the new strategic route."

"The Crewe Green Link Road will be a real bonus for Crewe, we need to make sure that it becomes the chosen route for these heavy lorries.  There have been several campaigns to reduce the weight limit of vehicles using the A534 Crewe/Nantwich Road.  This is the time to take action. If we can make this happen, by encouraging more traffic to use a better strategic alternative route, we will hopefully see a reduction in traffic through Wistaston and Willaston."

on the A534 Crewe/Nantwich Road close to Willaston War Memorial