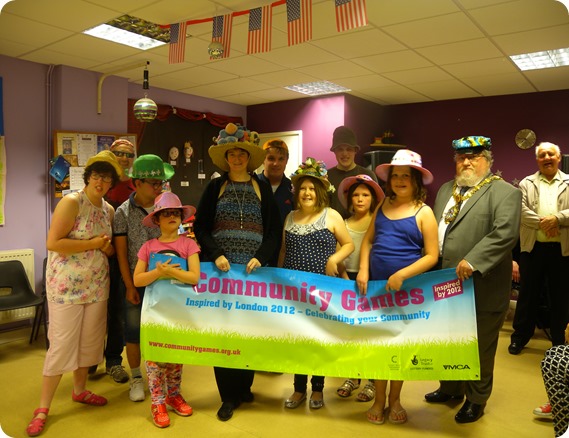 The event was for people with disabilities and their friends and families, as part of the community games, which are aimed at bringing communities together by taking part in sporting and cultural activities inspired by the London 2012 Olympic and Paralympic Games.

The event was attended by The Mayor of Crewe Town Council, Councillor Dennis Straine-Francis who was pleased to see everyone enjoying themselves. He was also part of a judging team at the disco when a HATWALK competition took place. The staff at the Crewe Baths and the Purple Onion helped make the event a success and Peter and Helen Shields provided slush-ice, to cool everyone down at the disco!

"There was fun with plenty of laughter in the pool and at the disco. The HATWALK competition saw some excellent summer hats and the Mayor of Crewe Town Council gave prizes to Paula Latham and Colette Tyre whose bright and colourful hats gave us a real flavour of summer." - Gareth Roberts, Secretary.

Pictures attached showing some of the swimmers with the Mayor of Crewe Town Council and the Mayor with some of the participants in the HATWALK competition.