Two Wistaston residents, Joyce and Graham Rawlings, laid a wreath for Harry Burnadine Rawlings on the 100th anniversary of his death in the First World War on the 30th of March 2015. See photo below.  Harry was born in Crewe and at one time lived in Rigg Street with his brother Walter.

Cllr Brian Silvester said, “It is wonderful  that a war hero can be remembered in this way, 100 years after his death. I attended the service and it was a very moving occasion. I would like to thank Joyce and Graham for  arranging this tribute to a Crewe war hero  who gave his life, so we could be free to live our lives. The ultimate sacrifice.”

Joyce said, “I have supported the British Legion Poppy Appeal for many years, having a cross and poppy laid outside Westminster Abbey to commemorate my grandad, George O’Brien, who was killed 2 months before mam was born.  We have commemorated grandad, Lewis Albert Payne from Tasmania, and Harry Burnadine.  We have pledged to 3 more – one each year until 2018.  Lewis Albert was no relation but we were asked to commemorate him – which we did – and we made contact with his relatives in Tasmania and New South Wales.  A pity we could not find any relatives of HB.” 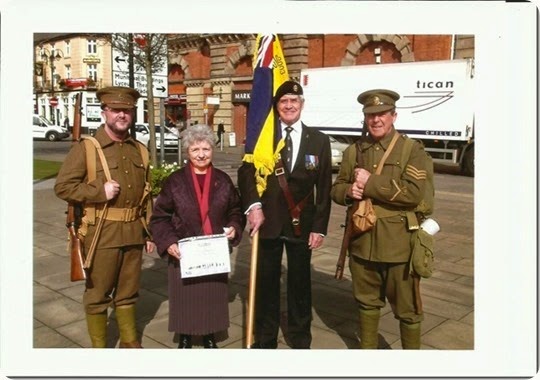