It took 54 hours of precision and careful non-stop work – but a new railway bridge has been installed successfully as part of the Crewe Green Link Road project.

Weighing in at 2,000 tonnes, the bridge was driven into place during the Easter weekend after six months of construction.

The Crewe-to-Derby railway line was closed for just over two days to allow the 38-metre bridge to be put in place and the painstaking operation was complete by 4am on Easter Monday.

It is a key milestone in the construction of the 0.7-mile road, which will reduce congestion in and around the town.

It will run between the A500 Hough-Shavington bypass and the A5020 – creating an alternate bypass for Crewe, improving access to the A500 and M6. It will also help unlock the potential of two major employment sites at Basford and help facilitate the creation of up to 12,500 jobs over 20 years.

The bridge allows the new road to go underneath the railway line.

Caroline Simpson, executive director of economic growth and prosperity at Cheshire East Council, said: “This was a very complex operation and required all hands to the pump.

“Our contractor did an excellent job in ensuring this key stage in the project was completed successfully and on time.

“The Council is pleased that work is progressing well on the road and, once complete, it will allow traffic to move around Crewe rather than directly through the town centre and Nantwich Road.”

A rig vehicle with 128 wheels on either side was needed in order to take the weight of the bridge and carry it 45 metres towards the railway line before lowering it into place.

Work on Crewe Green Link Road started at the end of August 2014, and is due to be completed by the end of this year. It is one of a number of projects to support Crewe’s economic development over the next 20 years and will benefit residents and businesses.

Paul Colman, chief executive of South Cheshire Chamber of Commerce, said: “Businesses have been telling us for a long time that the movement of people, staff and goods within South Cheshire is really important to them.

“This project will hopefully alleviate some of the pressure on the town centre and take people on the ring road around Crewe.” 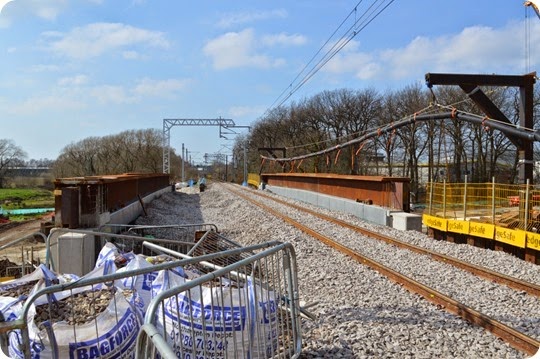