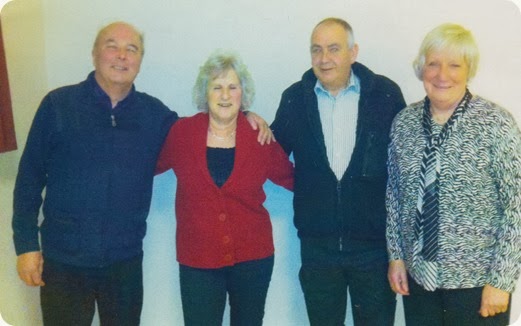 The Spring League of the Slazenger South & Mid Cheshire Tennis League, organised by Chris Raiswell from Wistaston Jubilee Tennis Club, is well underway with each team having played at least one match. Local teams participating include Audlem, Hightown, Nantwich, Wistaston and Wrenbury. The top team and bottom team in each division will be promoted or relegated respectively, which will form the Winter League later in 2014. Fixtures, results and tables are updated during the year via the League website: http://www.smctennis.co.uk

The 68th Annual General Meeting of the Slazenger South & Mid Cheshire Tennis League took place on Thursday 13th February 2014 at the Holmes Chapel Victoria Club. Twenty-seven people attended, representing thirteen clubs participating in the League. The meeting recognised the work of John White, from Wistaston Jubilee Tennis Club, who retired as League Secretary after forty years as an officer. He was made a Vice President of the League as a token of the League's esteem.

The presentation of trophies will take place at Cuddington Tennis Club on Sunday 14th September 2014.