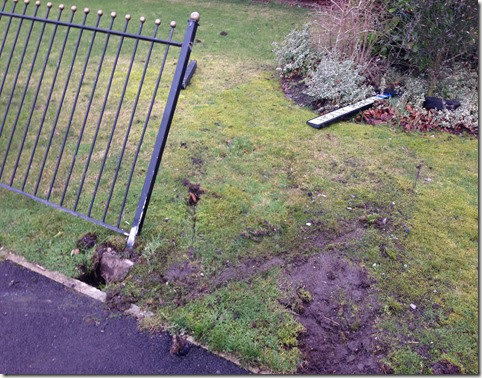 Cheshire East’s Wistaston Ward Councillors Margaret Simon and Jacquie Weatherill are delighted that Crewe and Nantwich residents are getting behind their call for a safety review of the section of the A534 Crewe/Nantwich Road which runs through their Ward.  Since the Chronicle article a couple of weeks ago even more local residents have been contacting them expressing their support and adding to the list of concerns.

“We have obviously struck a chord with Crewe Road residents and also with people who use it each day.  More of them have been in touch including parents who walk along it taking their children to the local schools.  One parent sent me photographs of damage that had taken place at the junction of Holly Place with Crewe Road.  Barriers had been erected by the damage and they were subsequently hit and moved by another vehicle.

Crewe and District Sustainable Transport group ACT have also contacted me and have given this statement;

It’s time that the speed limit was reduced, safe crossings installed at the Peacock roundabout and other junctions, and a restriction put on through traffic.  Part of the

traffic through the area.  Yet, like many other schemes, a purpose-built highway was constructed, but the old road (A534) was not downgraded.  It remains a wide and fast road running through a major residential area.

At a time when Cheshire East Council are calling for more people to walk/cycle short distances, we believe it’s time for them to move from car centric solutions to making residential areas safer and healthier for the community.  Let’s give the roads back to the people.

Jacquie and I are grateful to everyone for their support, we will endeavour to keep them informed as the review progresses.”

“It’s very encouraging that people have been in touch with us, the information that they give to us all helps to build up a picture of what has been happening along Crewe Road, Wistaston and Willaston over the last few years.  I would ask that other residents also get in touch to keep us informed.  If they have information, dates of incidents and photographs of damage to their property it would be very useful if they could share it all with us.

A Cheshire East Highways officer has recently confirmed to Cllrs Simon and Weatherill that the Route Management Study will be carried out in the 2014/15 programme, as a priority,  including an open engagement event and then progression of the review.

The A534 does not need a speed reduction, the people that use it just need to be educated on road safety. By all means install crossings to enable safe crossing.

Whenever someone gets run over the blame is always put on the car driver, traffic even the road, no one ever says its down to the person that was knocked down. “Oh that road is dangerous”

Step out in front of a vehicle and your going to get hurt. Full stop!

This article is very anti-car.