Icing on the Cake for Sportsmans Parents 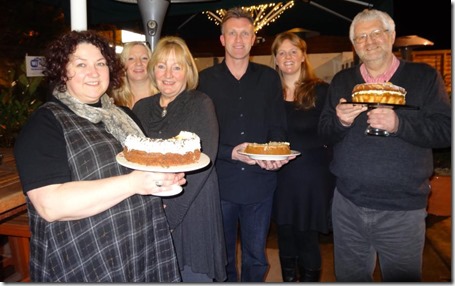 CREWE Alex manager Steve Davis was the guest of honour at a ‘cake-athon’ organised by RedShift Radio at the Boot and Shoe pub in Nantwich.
Friends of RedShift, Sue and Chris Dewhirst tragically lost their son Matthew Dewhirst last summer during rugby training in Shropshire.
Matthew, who would have been 18 on the day of the cake-athon fundraiser collapsed with an undetected cardiac defect.
The Matthew Dewhirst Foundation, now linked to C.R.Y(Cardiac Risk in the Young) has been set up in his memory to raise awareness and funds to ensure that young sports people across South Cheshire and Shropshire can be provided with the test that will detect any heart problems that could be affected by sports training.
RedShift Radio’s Liz Southall said: “I was thrilled with the turnout. There was such a lovely atmosphere and it proved a brilliant launch to our campaign to get our local sports teams tested for a condition which claims many lives.
“Having the commitment from Steve Davis to be a Patron for the Matthew Dewhirst Foundation is superb and I would like to thank him for coming along at short notice.”
The event invited sweet-toothed regulars to chip in £1 per slice to enjoy cakes and desserts by members of the Clandestine Cake Club.
The group, which includes keen cooks from across Nantwich, pops up at venues to share delicious cakes and recipes with members of the public.
Local coordinator, Helen Gregory said: “This was by far the most popular Cake Club meeting since we started six months ago. It’s so nice to know that our cakes were shared by so many and helped to raise a whopping £350 for CRY.”
The next Clandestine Cake Club will meet on Monday February 18. For information on the “secret” location email liz@redshiftradio.co.uk or call 01270 214 868
To find out more about Cardiac Risk In the Young, visit www.c-r-y.org.uk