On Tuesday 23rd October 2012 evening 15 teams of 4 people participated in 6 rounds of 10 questions, during the Wistaston Annual Hall Quiz for the Fred Lorimer trophy. 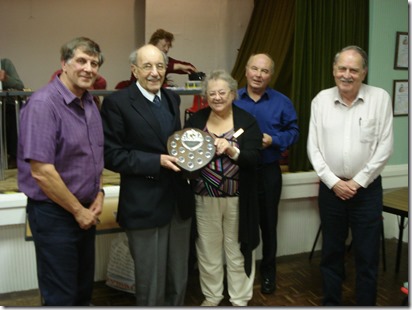 The quizmaster was Geoff Armitage ably assisted by markers Sheila Armitage and Meurig Jones and scorer Glenys White.
The raffle was organised by Herbert Locke MBE for prizes which were all kindly donated.
The half-time refreshments were organised by Audrey Astbury, Olive Williams, Sue Brown, Margaret Beresford, Kathleen Conroy and John Astbury.
The winning team was called 'The Hall Stars' with 52 out of a possible 60 points. The team was captained by Brian Edge with the other team members being John Lomax, Alan Brown and John White, who were presented with the prestigious Fred Lorimer trophy by Wistonian of the Year Sheena Sambrook. In second place were last years champions '4 in the corner' with 47 points. 'The Scrabblers' came third with 46 points.
Event organiser John White said, "We had another enjoyable and successful community event, which raised £152 for hall funds. We thank everybody who supported this annual event for the Fred Lorimer trophy".