Following his search for guests of honour to turn on Nantwich’s Christmas lights, the Mayor of Nantwich, Councillor Arthur Moran has been inundated with nominations.
The Mayor received so many very worthy applications making it a very difficult decision to choose just a small selection, but after careful consideration he has selected five young VIPs to join him on the switch-on stage this year.
Those selected truly are inspirational having gone through more in their short lives than what many of us endure in a whole lifetime.
The Mayor commented: “I’m delighted that I have been able to offer a little joy to some of the town’s most deserving youngsters this year. I would like to thank all those who have nominated, it was such a difficult decision as each and every one was a worthy candidate.”
Preparations for the big night are now well under way. The Mayor and Christmas tree sponsor Applewood Independent’s Managing Director David Pritchard joined one of the VIPs, Cara Morris, in town for a test of some of the lights ahead of the event.
Cara will press the button with Lily-May Arden, Mason Taylor, Meghan Kewley and Georgy Capener.
Proceedings on Friday 15th November will start at 12 noon when the mini-market sets up along Churchyardside with a selection of gifts and treats.
An array of entertainment will then follow on the stage in the town square from 4pm onwards, including a set from UK Bjorn.
A guest appearance will be made by Father Christmas, before the lights switch on and spectacular firework display from Blitz Fireworks around 7pm. 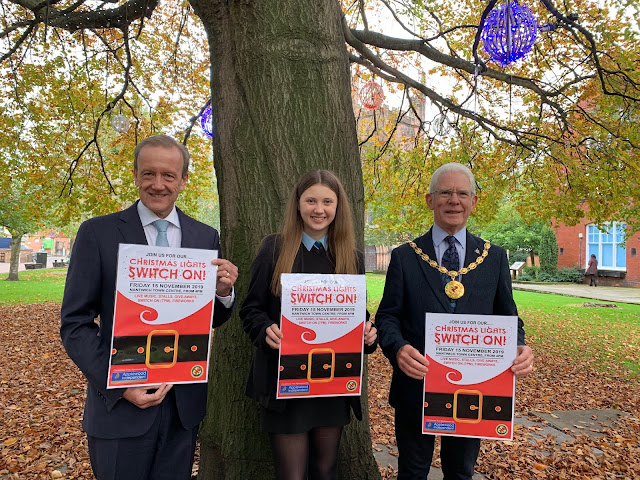