Work to replace Sydney Road Bridge in Crewe with a structure capable of taking two-way traffic has reached a major milestone. 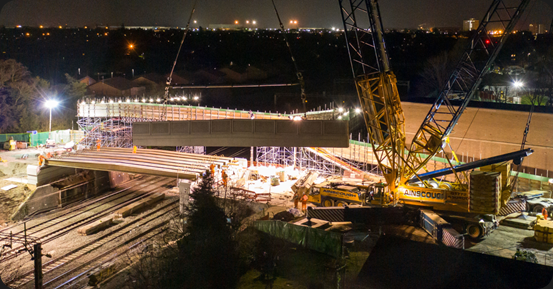 Over the past four weekends, a 1,000-tonne crane has safely lifted out the old concrete arched bridge on Sydney Road and installed a new wider bridge, which is supported by nine steel beams.

Works can now continue to complete the surface of the new structure, which spans the West Coast Mainline, widen Sydney Road and install pedestrian crossings, road markings and street lighting.

Councillor Don Stockton, Cheshire East Council cabinet member for highways, said: “The removal of the old bridge and installation of the new structure was an impressive feat of engineering and represents a major milestone in this project, which I’m pleased to say continue to progress on programme.

“We recognise that the works at Sydney Road Bridge have caused disruption to nearby residents and to motorists and we would like to reiterate our thanks to them for their patience and understanding.

“Once this major scheme has been completed in just a few months’ time, it will remove the ‘pinch point’, which was created by the previous bridge, and the town and local residents will be able to feel the benefits. It will also help to unlock the north west corridor of Crewe.”

The £11m improvement scheme has been largely financed through the Department for Transport and Cheshire and Warrington Local Enterprise Partnership, with a £5.85m grant from the Local Growth Fund, and a further £4.15m from developer contributions.

Due for completion by the end of May this year, the scheme will include a shared cycleway and footway over the bridge, a signal-controlled pedestrian crossing and improved cycle provision along Sydney Road.

Christine Gaskell CBE DL, chair of Cheshire and Warrington Local Enterprise Partnership, said: “Crewe is an important economic centre and it is vital our businesses operate in an environment that allows them to thrive.

“Part of that is ensuring their people can reach work quickly and easily. So we are delighted that the Sydney Road Bridge project continues to move forward, with the schedule of works for this important gateway on target.

“The LEP, through its £201m local growth fund allocation, contributed £5.85m as part of our ongoing commitment to growing the Cheshire and Warrington economy and that of the Northern Powerhouse.”

Other work at the site over the past month has included moving and relocating overhead power lines for trains.

Chris Atkins, scheme project manager for Network Rail, said: “We have reached a major milestone in the project to replace Sydney Road Bridge in Crewe, which we are delivering on behalf of Cheshire East Council.

“The old bridge has been removed and all the major steelwork has been successfully installed, which means that the remaining works can be completed without further disruption to passengers.

“We’d like to thank passengers, residents and road users for their patience.”