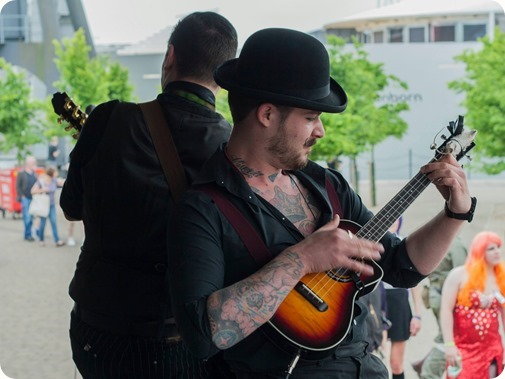 Crewe will be awash with Victorian elegance and eccentricity over the late May Bank Holiday when the inaugural Steampunk Convivial is staged around the town centre.

The Steampunk movement is centred on Victorian science fiction and fantasy. It encompasses elements of a by-gone era, Gothic excess, vampires and robotics, and imagines that steam power never gave way to electricity or petrol combustion engines.

Over the weekend there will be free street entertainment, music and buskers, a town crier, steam traction engines, a dancing bear, face-painting, an exotic Steampunk market at the new Lifestyle Centre, plus ticketed variety shows at the Lyceum Theatre and Crosville Club.

Festival organiser David Smith has successfully staged similar events around the country, including medieval festivals, vintage craft fairs, re-enactment markets and the National Living History Fayre, which is one of the largest in Europe.

David said: “Crewe has steam in its very DNA. The world-famous Crewe Works built over seven thousand steam locomotives, including many iconic designs, some of which are still running today, such as the Duchess of Sutherland no.46233. The Municipal Buildings, Market Hall and Heritage Centre should be celebrated. The town is perfect for Steampunk.”

Several prominent positions around Crewe town centre will be transformed as exhibition and entertainment spaces. Lavish town crier Count Alucard and escort Lady Jenny will direct visitors between attractions, including a Time Travelling tea tent, a Palace of Curiosities, plus lawn croquet and bowls staged on the raised area above Remembrance Square.

A number of Crewe businesses will also feature prominently, including Offbeat micro-brewery who have embraced the festival wholeheartedly and brewed a craft beer especially for the event.

Brewery owner Michelle Shipman said: “Offbeat is quirky and very different from the norm, so we’re a great fit with the festival. The Brewery on Thomas Street will throw its doors open and welcome visitors on the Saturday afternoon.”

“We love coming up with unusual flavours and names, so beer connoisseurs should love our SteamPunk’d Amarillo IPA that will be available in cask, keg and in bottles,” she added.

To complement the town centre activities there will be ticketed evening events at both the Crosville Club and Lyceum Theatre. An impressive line-up of renowned Steampunk performers has been assembled, and organisers expect fans of the genre to flock to the shows from all over the country.

Similar festivals are already a huge success in Lincoln, New Malden (Surrey) and at the historic Chatham Dockyard (Kent).

The Crewe Steampunk Convivial opens with an extravagant Welcome Party at the Crosville Club on Friday 27th May. A variety hall combination of light-hearted entertainments, hosted by Burlesque star Diva Hollywood, will include You Tube sensation Professor Elemental, music from lively London duo Victor and the Bully, plus the amazing Ichabod Steam and his Animatronic Band. Tickets for the event are just £10!

A sense of drama and mechanical scale comes courtesy of three vintage Steam Traction Engines - Dougal, Bonzo, and Michelle-Louise - that will be present in Crewe town centre on the Saturday, Sunday and Monday. They will be static but in “full steam” for the delight of passers-by.

Dress code for all Steampunk events is entirely optional. There is no right or wrong, from a simple Victorian cap to extravagant waistcoats, top hats and intricate jewellery. Organiser David Smith believes that all visitors will have fun and can enjoy the eccentricity on show.

David said: “No one in Steampunk says that something is not right, or that it’s not authentic. They will say that it’s splendid. Any effort is an effort worth making and very much appreciated. People should come along and celebrate the Victorian splendour of it all."

He added: “I hope this will be the start of a superb annual event that the whole of Cheshire will be proud of. We are lucky to have secured some of the biggest names in Steampunk, such as Montague Jacques Fromage from America, who is a truly global star of the genre. He always steals the show!”

The Crewe Steampunk Convivial will take place from Friday 27th through to Monday 30th May. For further information, visit the festival’s official website www.crewe-steampunk-convivial.co.uk