Cyclists saddle up for Alzheimer’s

The third “Alzheimer’s 100” charity cycling event will once again be staged in and around the historic market town of Nantwich this June.

Organisers of the annual fundraiser ride in support of the Alzheimer’s Society, the organisation that is leading the fight against dementia.

Darren Greatbanks, a British Transport Policeman from Crewe, lost his father to the illness in 2014. Since then he has worked tirelessly and cycled hundreds of miles raising money for dementia care and research.

The ALZ100 event was established in 2014, when Darren and close friend Andy Williams joined over sixty other riders to raise £21,000 through raffles and sponsorship. Numbers increased to 230 cyclists in 2015, and organisers hope to see all 250 sponsorship places taken for this year’s fundraiser.

“How the event has grown has been incredible. My dad would have loved seeing so many riders taking part, and that’s one of the driving forces that keep me motivated. He introduced me to bikes and he would have liked to tackle the course himself,” Darren said.

“We’re on track to top a fantastic total of £100,000 raised over three years, and that doesn’t include the Gift Aid donations. The money is essential to keep searching for a cure or a way of slowing the onset of the dementia illness,” he added.

Riders will set out from Nantwich War Memorial in the town centre. They will tackle distances of 25, 55 and 100 miles long, depending upon age and ability.

The 25-mile circuit suits casual riders, families and under-17s. It loops around Nantwich, taking in the villages of Audlem, Bridgemere, Wrinehill, Wybunbury, Shavington and Willaston.

The challenging 100-mile option is the 55 mile route to Hack Green before heading back out to complete the route in reverse.

Spectators and supporters are encouraged to wave to riders throughout the course, but organisers have emphasised the need to watch from a safe place.

“With 250 riders taking part it should be quite a spectacle this year,” said Darren. “It really encourages the riders seeing supporters along the route, and it helps to raise awareness about Alzheimer’s. But please keep a safe distance from the cycles and listen to advice from the marshals.”

On the Sunday evening the White Horse will host a post-cycle party that includes an auction and a live performance by Electro 80s, the UK’s premier electronica tribute band.

Further details about sponsorship and the evening celebration can be found on the ALZ100 website http://alzheimers100.co.uk where people can sign up to cycle or donate via Just Giving. 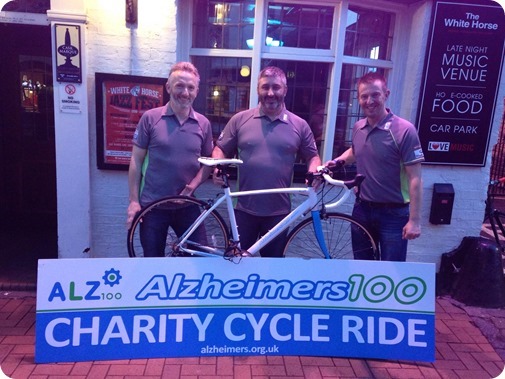