Crewe Mums Step Back in Time with local History Exhibition 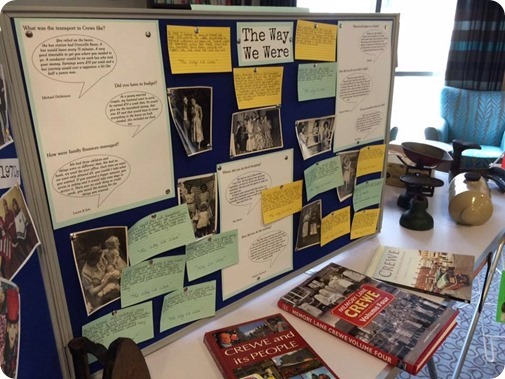 An exhibition celebrating the lives, times and history of Mum’s in Crewe has been launched and now touring the area.

MotherWell CIC, working with local community groups, has produced the “Mum’s the Word” project which explores how the lives and roles of Mum’s living in Crewe has changed over time.

Funding from Cheshire Crime Commissioner, as voted by central Crewe residents, enabled the idea of the exhibition to transform into a reality. Almost 80 people, led by Kate Blakemore and MotherWell volunteer Natalie Simm, came together to work on the project over a six month period, as it developed across six different locations in central Crewe.

From the early stages of developing the exhibition, it grew beyond just the Mothers view of Crewe, as it extended to an overall celebration of the area. Now, visitors can expect to find out more about subjects such as the history of Crewe Alex Football Club and see ‘Then and Now’ photographs from well-known streets and shops in the area.

The exhibition focuses on Mums in Crewe but also features the history and changes that have taken place in the area during over time. Old newspaper clippings, photographs, toys, poems and case studies of famous people who were born or have visited Crewe are just some of the features that make up the extensive exhibition.

Supporters and sponsors including Wulvern Housing, Plus Dane Housing, West Street Christian Fellowship, West Street Baptist Church and the Children’s Centre will now host the exhibition as part of the tour in order to widen the access to the greater community.

Residents can see the exhibition from Tuesday 12th April at St Barnabas Church on West Street, where it is expect to remain for about a month.

MotherWell CIC, launched in March 2015, is “women supporting women on their mothering journey by inspiring them to sparkle and shine". This is offered by way of events, volunteering opportunities, support groups, wellbeing days and counselling. Initial ideas for the “Mum’s the Word” project began when one Mother within the group asked “I wonder what it was like being a Mum in the olden days??”

MotherWell CIC co-founder, Kate Blakemore, said: “This has been an incredibly popular exhibition. We have all been surprised at the wide variety of people who have been interested in helping to make the project.

“For example, one elderly gentleman took a real interest because his Mum had raised him as a single parent in Crewe. His contribution was really valued and was an opportunity for him to reminisce about the pride he showed in his upbringing in the area.

“The Polish community living in Crewe have also demonstrated their pride in Crewe since the launch, through their interest. It has been a great way of combining common interests and bridging gaps between the communities.”

Wulvern Housing’s Pickmere has been one of the six locations in which the exhibition was compiled.

Pat Sandland, Wulvern’s Extra Care Manager, said: “It has been fantastic developing the ‘MotherWell’ project at Pickmere, our Extra Care housing scheme in Crewe. Memory sharing is a proven way to help elderly people and those suffering with memory problems to remember events from their past, maintain their confidence and improve their self-esteem.

“Our residents have really benefitted from being involved with the project and have enjoyed sharing their experiences of growing up with the younger mums and each other.”

MotherWell are now looking for sponsorship from local businesses and projects to fund an extension to the popular exhibition. Development plans include exploring the history of Crewe Railway, Crewe Works, Bentley and women’s fashion.

If you are interested in sponsoring the extension of the project, please contact Kate Blakemore on 07734868325 or email info@motherwellcic.com