Welcome to this, my 146th news bulletin.

As I've said before, 2013 brought a real boost for employment, business, and infrastructure in our area. The local economy is looking up. We're doing our bit to help improve the lot of the United Kingdom as a whole, and benefiting from it too.

And we're very much part of that wider, national picture. A large part of what I'm asked to vote on in Westminster is national policy, and it's important that I keep you informed about that too.

The Prime Minister pledged to give people a say on Britain’s relationship with the EU in a referendum in 2017.

The Prime Minister secured the first ever cut to the EU budget, saving hardworking taxpayers hundreds of millions of pounds each year.

The Budget froze fuel duty, saving hardworking families an average of £7 every time they fill up their tank. A further freeze was announced in December’s Autumn Statement.

May – Government cut National Insurance for businesses, making it easier to employ people

We announced a £2,000 cut in jobs tax. 450,000 small businesses will now pay no jobs tax at all – including many corner shops, grocers and other businesses the community relies on.

June – Government put families on the lowest energy tariffs automatically, saving them up to £160 a year

The Energy Bill, which passed the Commons in June, requires energy suppliers to switch people to the lowest tariff available, giving people more peace of mind about, and control over, their outgoings.

Rolled out from July, the Benefit Cap means no out-of-work household can claim more than the average working family earns.

In August we announced £500 million to help A&E departments prepare for this winter so that hardworking people can access safe and reliable emergency care whenever they need it.

In just one month, over 2,000 people were accepted for a Help to Buy mortgage. Most applicants are first time buyers, young, and have a roughly average household income.

In November, the Prime Minister announced that EU migrants will have to pass much tougher tests and wait for three months before they can apply to claim out of work benefits.

In December the Office for National Statistics announced that there are now a record 30 million people receiving a pay packet each month – giving them the chance of a secure future for themselves and their families. Crewe and Nantwich has also seen its share of this success, with a reduction in both overall and youth unemployment.

And as we move into 2014, you can be sure of my continued commitment to keep working hard for and on behalf of all of you, so that the real progress we've made together is built on in the year ahead.

Edward Timpson MP
Member of Parliament for Crewe and Nantwich 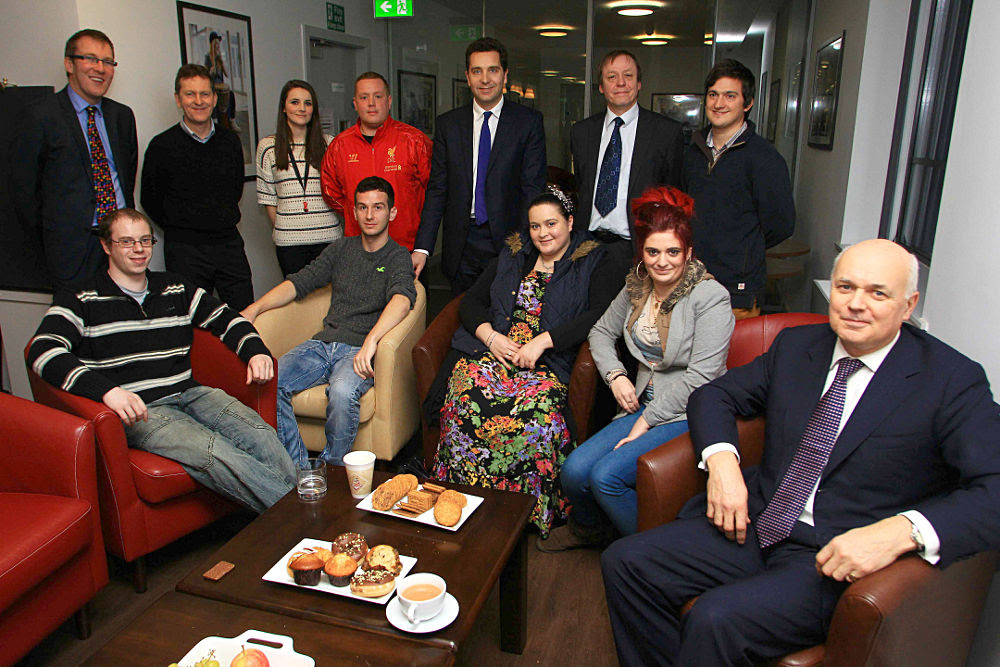 Earlier this month, I brought Iain Duncan Smith MP (right) to visit the YMCA in Crewe. The Secretary of State for Work and Pensions, Iain Duncan Smith's interests in Government include social action projects as a way to help communities flourish and to assist those most in need.

The Dabber: Nantwich Methodist Church is launching a new a community cinema project in Nantwich this weekend.

The project, called ‘Nantwich Family Films @ 4′, will be officially opened on Sunday by Crewe and Nantwich MP Edward Timpson.

The project has received funding from Nantwich Town Council, Nantwich Rotary Club, The Rank Foundation, The Co-Operative Community Fund, Chester & Stoke on Trent Methodist District Families Fund and Cheshire South Methodist Circuit. Films will be screened on the third Sunday of each month, with this Sunday’s screening being Disney’s ‘Wreck it Ralph’.

Screenings will take place at 4pm, with doors opening at 3.45 pm.

Family tickets, which cover up to two adults and four children are just £10 per family, and individual tickets cost just £3. Refreshments will be on sale at low cost and face painting is also available from 3.15 pm for those who would like to get into the spirit of the film.

MP urges people to make sure causes are legitimate

Crewe and Nantwich MP Edward Timpson has urged people to check they are giving charity donations to legitimate causes.

Almost all collections are genuine, but some people will try to abuse the generosity of others for their own gain. The public has a key part to play in keeping charities accountable by using the resources available to them, though nearly half of adults never make any checks when approached by a collector for a charitable donation.

Asking for ID, looking for the FRSB 'give with confidence' tick and checking the Charity Commission online register are all simple checks the public can carry out to ensure their money goes to the right cause.

Mr Timpson said: "Christmas is a key period for charitable giving, with many charities relying on money raised during the winter months to fund vital services throughout the year.

"Donors give generously, but increasingly questions are being asked and concerns raised with the FRSB about the legitimacy of fundraising campaigns."

This is an extract of a longer article from the Crewe Chronicle.  You can read the full article by clicking here.

Crewe Chronicle: Crewe and Nantwich MP Edward Timpson visited Wistaston Green Primary School to see the improvements made to the school which Ofsted has rated as ‘outstanding’ in all areas.

Mr Timpson, who visited the school just before the Christmas holidays, was impressed by the changes which had taken place since his last visit.

The Crewe primary school is planning to convert to an academy in the near future.

Most schools are only deemed satisfactory after coming out of special measures and it normally takes double that time. Last year Wistaston Green was rated as outstanding in all areas.

Nantwich Chronicle: Crewe and Nantwich MP Edward Timpson visited a Nantwich supermarket to see how they are supporting a local charity. Mr Timpson met staff at Sainsbury’s to learn of their activities supporting the Wingate Centre in Wrenbury.

All funds go to the Wingate Centre, for which Sainsbury’s has so far raised £3,000.

Mr Timpson said: “It’s great to meet the team and hear about their upcoming plans to support the local community. Involving residents in a Christmas singalong will bring everyone together and create a really festive atmosphere.”

Store manger Ian Sutton added: “Sainsbury’s prides itself on being a great place to work and we are really proud to show Mr Timpson how active we are in the local community.”