NHS charities across the country will once again join together to celebrate the anniversary of the launch of the NHS and to raise awareness of the work they do to support NHS Trusts every day of the year.
The NHS Big Tea campaign runs between 24 June – 7 July and is an opportunity for people to join together to ‘raise a cuppa’ to the NHS whilst raising funds for their local NHS charity.
Mid Cheshire Hospitals Charity, based at Leighton Hospital, Crewe, will be holding a tea party for patients, staff and supporters on Monday 1 July. They are also encouraging local businesses, individuals and groups to hold their own events throughout the campaign. Some of those who have already signed up include: Asda, Crewe; Richmond Retirement Village, Nantwich, and Crewe Alexandra Football Club. Staff from Mid Cheshire Hospitals NHS Foundation Trust are also getting involved with the Urology Outpatients department and Orthopaedic Department Administration Team already signed up.
Emma Robertson, MCH Charity Manager, said: ‘Getting involved with the NHS Big Tea campaign is a fantastic way to show your support for the NHS and your local NHS charity. We were really pleased with the support we had from our local communities in 2018 and we’re hoping this year will be bigger and better. It’s easy to sign up through our website and we’ve created a resource pack for supporters which is full of things to help promote and run their event. We’re also keen to hear from companies who may be able to donate items or support for our tea party so we can put on a great day for our patients, staff and fundraisers.’
The national NHS Big Tea media launch will take place on Thursday 13 June 2019 at St. George’s Hospital, London on their helipad. Charles Venn, star of Casualty and Strictly Come Dancing, has agreed to take part in the NHS Big Tea photo shoot with Jacqueline Dunkley-Bent, the first Chief Midwifery Officer for England. Dr Ranj (best known for ITV This Morning, as a resident doctor; CBeebies show ‘Get Well Soon’ from 2012 to 2015, as well as co-hosting ITV Save Money: Good Health alongside Sian Williams and a celebrity dancer of Strictly Come Dancing in 2018) is also hoping to be part of the launch. 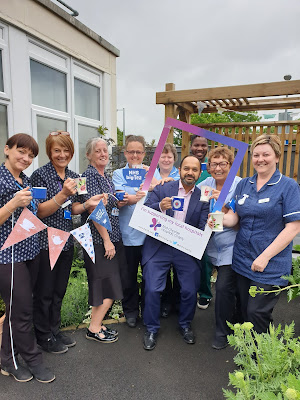