Reporter J White
Police issue warning after children risk their lives to climb on scaffolding at Wistaston building site
Police have issued a warning after trespassing children risked their lives to climb on scaffolding at the building site of the Bloor Homes ‘Wistaston Brook’ housing development off Church Lane in Wistaston.
Youths were seen jumping over security fences before scaling the scaffolding and police have warned children not to risk their lives by entering the site and treating it like a playground.
A Cheshire Police spokesman said, “Patrols responded to reports of kids climbing on scaffolding at the Bloor Homes building site in Wistaston… We cannot emphasise how dangerous these types of working construction sites can be, especially with the reports detailing them scaling the scaffolding!”
On completion Bloor Homes at Wistaston Brook will be a mixture of two-, three-, four- and five-bedroom houses, with three-bedroom houses starting from £199,995. The estate is being built on the former Witters Field farmers field and public recreation area. 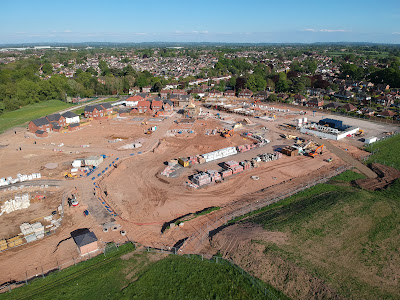