The Vikings are coming …..

Tatton’s Old Hall is bracing itself for a Viking invasion, 1,000 years since Norsemen first crossed the Cheshire borders. And these ones are no less terrifying!

On Sunday, August 12 The Vikings of Middle England will be staging a dynamic and exciting re-enactment event in the atmospheric grounds of Tatton’s Tudor Old Hall.

Witness the clash of steel and hear the smash of axe on shield as these hardened warriors demonstrate Viking combat skills. The Vikings of Middle England are renowned for their historical authenticity and their ‘realistic, exciting and entertaining battle displays.

It’s not all about battle and ‘bloodshed’; around 30 re-enactors will be setting up an authentic Viking camp at the Old Hall and demonstrating the domestic side of Viking life. They will be joined by The Viking Long Ship Experience who will show that Vikings were traders as well as raiders and invaders. Visitors can learn about the Viking way of life through other living history activities such as story telling, blacksmithing, cooking over open fires and coin-striking.

A number of other displays will keep young and older visitors entertained from storytelling to the opportunity to try on armour and test out their own expertise with an archer’s longbow, for a small charge.

Old Hall steward Mick Ricketts said: “In the old Norse tongue the word Viking means raider or pirate and everyone loves a pirate, don’t they? Pirates are jolly but pirates are also ruthless and good at fighting and plundering. Viking Sunday brings a whole era back to life within the picturesque and normally

tranquil setting of the Old Hall. Be prepared for the crash of steel on steel or the thud of steel on shield but also find out about Viking crafts and culture.” 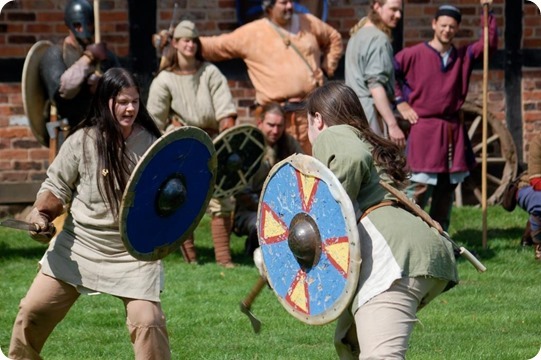