Stuart and Alan have been long distance walking for four years. Starting in 2014 with an idea to walk The West Highland Way, they have pushed themselves every year to continue to the very top of the country, before deciding to go back to the beginning and walk the other way.

Their ‘Walk N Boots’ challenge took place at the beginning of April over three weeks and covered over 400 miles. They exceeded their original target of £1000 with a final total raised of £2478.64.

Alan Mackay, who also works at Leighton Hospital said: ‘We would like to thank everyone who supported us with our grand adventure and we are delighted to exceed our target.’

Carole Salmon, Community Fundraiser for Mid Cheshire Hospitals Charity added ‘A massive well done to Stuart and Alan. Their drive and enthusiasm for their fundraising has been inspirational. The donated money will benefit our Dementia Appeal so big thanks to all involved’

To find out more about Mid Cheshire Hospitals Charity dementia appeal and how you can be involved, contact Carole Salmon, Community Fundraiser on 01270 273248. 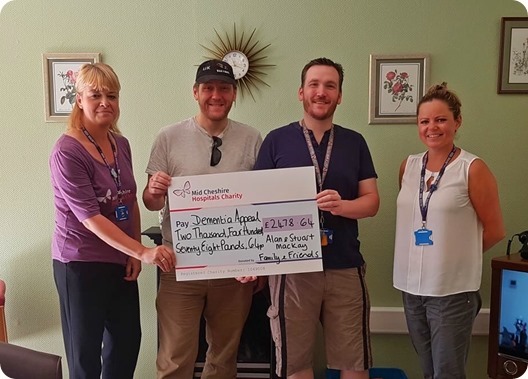