Seahorse Swimming Club have retained the Frank Hough Trophy as overall winners of the Halliwick North West Regional Gala. They competed against swimmers from Aquadis Swimming Club (Ellesmere Port) and Sailfin Swimming Club (Sale) in a close contest at the Lifestyle Centre on 23rd September 2017.

The Deputy Mayor of Crewe Town Council, Councillor Dennis Straine-Francis, presented the medals and trophies to the swimmers.

"In a close contest where the Seahorse swimmers showed lots of effort and determination it was pleasing to see them come out as overall winners. The Deputy Mayor was thrilled to see the swimmers show so much pleasure and pride as he presented them with their medals. He also congratulated all the volunteers involved with the gala." - Gareth Roberts (Secretary).

The Halliwick Association of Swimming Therapy promotes swimming for people with disabilities and the galas give swimmers opportunities to take part in competition, which are run on timed-handicapping, where swimmers compete on the basis of their ability in the water. 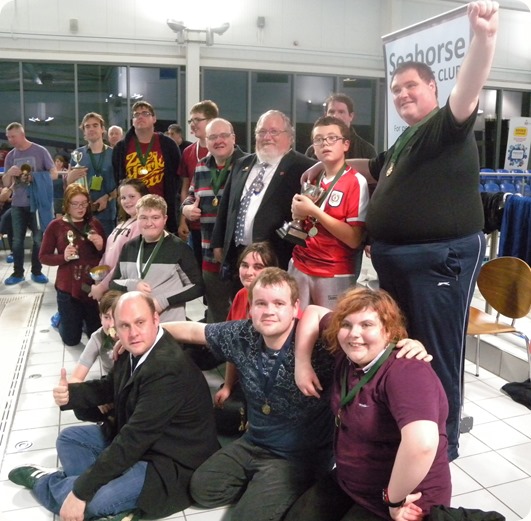