Young bookworms at Cheshire East Council’s Wilmslow Library were left open-mouthed when the climax to a story writing competition turned into a tale of the very unexpected.

As the children sat patiently, waiting for the announcement of the winner, the tension suddenly turned to a moment of uncontrollable excitement as England and Manchester United star Wayne Rooney appeared from behind the shelves of books to announce the winner and runners-up.

Seventy children, aged eight to 11, took part in the competition and were unaware that the soccer hero was to turn up in person to reveal the winning entry, before spending more than 30 minutes chatting with the children and being photographed with them.

Librarian Marg Charlesworth said: “Having Wayne take time out to attend this evening is far more than we could have wished for.

“The children have been absolutely thrilled to see him here.  He has shown a great interest in their hard work.”

His father John said: “He loves football and plays in goal for the under-nine’s team at school and with the Wilmslow Academy.  He is a bit overwhelmed by it all.

“Meeting Wayne Rooney has been the highlight of his year. We are very proud of him.”

The Sarafina restaurant company sponsored the event and paid to have Ajmain’s story turned into a bound book with illustrations.

Copies of the book went on sale last night, autographed by the soccer star and with proceeds going to the ambulance service charity CardiacSmart, to raise funds for a defibrillator.

Erik Garner, from Wilmslow Football Academy, set up the competition in which young writers had to pen a simple story with a football theme.

He said: “I spoke to Wayne about this and he didn’t hesitate to offer his support and agreed to come along to hand out the prizes. “The stories have been fantastic and the children have shown great imagination.”

Wilmslow Football Academy has more than 1,000 registered young players from as young as 18 months, who are known as the little strikers.

Councillor Paul Bates, Cheshire East Council cabinet member for communities and health, said: “I would like to express my heartfelt thanks to Wayne for showing his personal support for this project and for making this evening’s event so special.

“To have one of the world’s most famous footballers support our library and the work that we do with children in terms of literature, reading and writing, is simply fantastic and I am grateful to Eric Garner for his hard work in arranging this.” 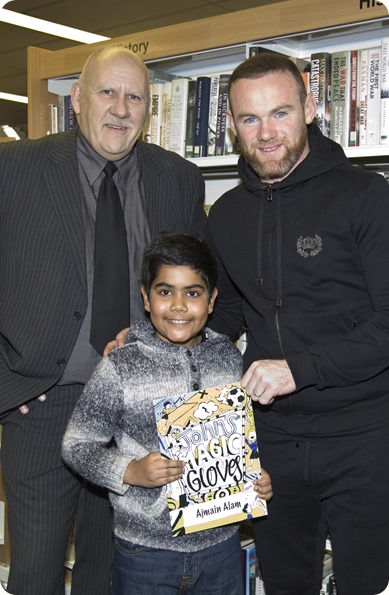