The Championship started shortly after 2pm and participants in each of the 144 plots had 30 minutes to collect as many worms as possible from their 3x3 metre plot. There were 'traditional' plots for teams of two and 'tag-team' plots for teams who wished to change their pairings throughout the charming period. Techniques included vibrating a garden fork, whacking a tennis racquet and jumping up and down.

The Chief Wormer's trophy is usually given to the youngest wormer. However, this year it was given to Pam, Pat and Anne-Marie – who have a combined age of 216 - for the great effort they put into their charming in collecting 11 worms from plot 7.

Most Promising Newcomer Award with 137 worms in plot 108 was won by the Smith and Williams families.

The Heaviest Worm trophy was won by Alana Healy in plot 42 with 4.23g.

Event organiser Mike Forster gave his sincere thanks to all the volunteers and visitors for their continued support of the event.

Events in the playground and arena included a performance by the Willaston School Percussion band, dancing by the X Academy of Performing Arts, the Willaston Scouts Ninja Poi Display Team, and singing by the Willaston Primary School Junior Choir. The arena and adjacent areas were surrounded by charity stalls, an inflatable slide and food and drink outlets.

The event took place in hot and dry weather and was enjoyed by several hundred people. 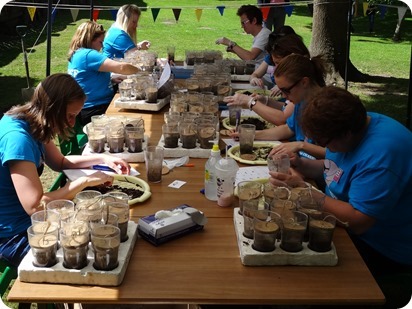