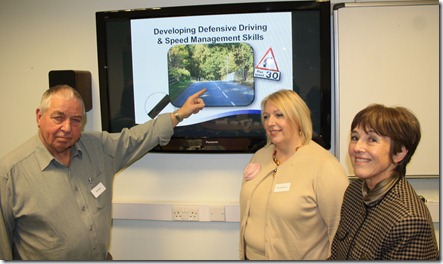 Margaret Ollerenshaw watched one of the four- hour courses which are offered to selected drivers who are caught speeding on Cheshire′s roads. They are an alternative to a fine and penalty points.

She said, "Most people obviously took the option of the course to avoid the penalty points. Some arrived with a very sceptical attitude. Some felt that because they were only driving a few miles above the speed limit, no action should have been taken.

"By the time they left, I think everyone felt they had a deeper understanding of why speed limits exist. They realised the importance of observing the limits and the risk to life if you don′t. They also appreciated that driving faster doesn′t necessarily get you to your destination more quickly. Most said they felt they would be better drivers as a result of the course."

Bill Ward and Gill Sandham were in charge of the classroom- based course. Gill said, "It is not a finger-wagging exercise but a group discussion. You cannot change someone′s attitude in four hours but you can make them think.

Bill added, "If you just give people rules, they switch off. You have to give them reasons which they can understand. We break some of the urban myths about speed cameras, too."

They said the reaction of the group watched by the Police Authority chairman was typical of the response to the course.

"Many people start by being very reluctant to take part, but they find themselves drawn into the discussion and leave with plenty to think about."

Superintendent Penny Wilson, in charge of road policing for Cheshire Police, said "The speed awareness course is about improving safety on Cheshire′s roads by educating drivers. We only offer the course when we believe it will be effective. Drivers pay a £75 fee and if they re-offend during the next three years they will not be offered the course option on the second occasion."