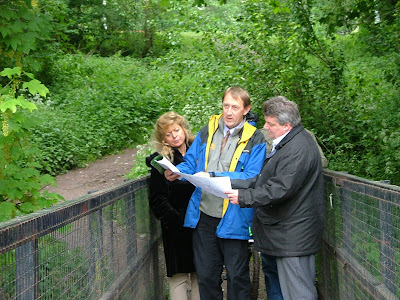 We had a meeting on Friday with Mike Taylor, Crewe Mayor Dorothy Flude, Elaine Dodd and Cllr Andrew Knowles and Crewe Blog at Tipkinder to promote the site and get improvements done.

Everyone was surprised by the area and the potential it has situated so near the the Queens Park. So many people go the Queens Park and don't even know the walk if a few feet away.

Everyone agreed that the site wanted promoting and there was work to be done in the area and it should start straight away.
The paths will be cleared and the rubbish removed as soon as possible and the trees made safe. It was a timely meeting as the next day a massive tree collapsed in the area I am sure that will be dealt with ASAP.

The long term plans depend on several issues like funding and consulting with all interested parties like local residents. Its not a simple matter to manage the area as new trees want planting, old trees felled or pruned and new plants to encourage wild life into the area.

Its hoped the Countryside Rangers can be appointed to look after the site as they can do weekly inspection advise members of the public etc.
The car park which is used when going to the Queens Park will be revamped and traffic lights installed to make it safer for children to cross the road.
More details of the meeting are over on Crewe Blog 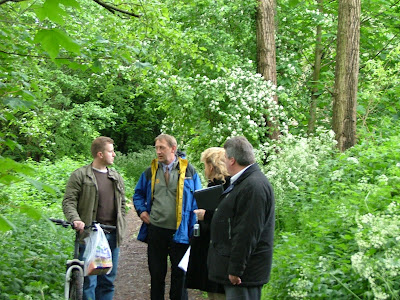