Reporter Jonathan White
Roy Price, aged 51 from Crewe, is progressing well with his gruelling training in readiness to cycle the 900 miles from Land’s End to John O’Groats (LEJOG) in May later this year. His ride is to raise money for cancer charity ‘The Joshua Tree’, who support North West families living with the life-changing experience of childhood cancer, https://www.thejoshuatree.org.uk/ .
On 6th February 2019 Roy completed his longest training ride yet, when he rode the 50 miles from Crewe to Prestatyn in North Wales. He chose this particular date, as it marked one year since he lost his wife - Ruth Price - from secondary breast cancer. He finished he ride at ‘Crispy Cod’ in the town, as this was a café that Ruth liked to visit.
Roy has been raising money in memory of his wife for the past twelve months. Roy, along with friends and supporters, have already raised over £8,500 for local charities via wheelbarrow pushes, a garden party, a charity night, a tombola, a raffle and by Roy hiking up Mount Kilimanjaro - the highest mountain in Africa.
Roy is being supported during his training and during LEJOG by Rob Simpson from Simpson & Edge Garage in Nantwich. The Railway Hotel in Nantwich have sponsored Roy’s cycle clothing and Rob’s crew clothing. Roy has the word ‘Simba’ on the back of his cycling shirt as this was the nickname given to him by his Tanzanian guides when he ascended Mount Kilimanjaro, due to a large lion tattoo on his left arm - Simba is the fictional character who appears in Disney's The Lion King.
After his ride to Prestatyn, Roy Price said, “The weather was absolutely horrendous when I set off, as it was raining quite heavily, and the wind was strong too. Plus, I’d only got as far as Wardle when I hit a huge pothole, which blew my front tyre and nearly threw me off my bike! Fortunately, Rob Simpson was behind me in the support van and helped me change my wheel. Despite jolting my neck and back I decided I was OK to carry on. A section of the route took me along the Chester Millennium Greenway, which was scenic, but for several miles I was against a very strong wind, it really was like being on an exercise bike! I had to make regular stops to take on fluid as it was so windy it was dangerous trying to take a drink whilst I was moving. I was tired but elated when I made it to Wales. However, it will help in my fitness for Land’s End to John O’Groats.”
To donate to Roy’s Land’s End to John O’Groats fundraising ride please visit: https://uk.virginmoneygiving.com/RoyPrice2 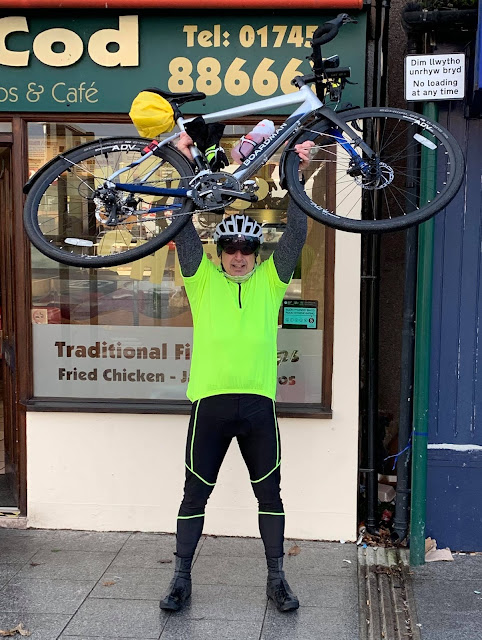 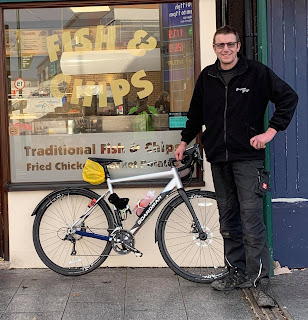