Reporter Jonathan White
A second fundraising charity concert takes place this year at Studio Nantwich on Castle Street in Nantwich on Friday 1st March 2019 with a live performance from world, reggae and rock music band ‘Arcadia Roots’. Doors open at 9pm andadmission is free with donations to Macmillan Cancer Support, https://www.macmillan.org.uk
Arcadia Roots will make a triumphant return to the town after dazzling the audience at The Bank Stage, adjacent to Studio Nantwich, during last year’s Nantwich Jazz, Blues & Music Festival.
Nigel Woodhouse, Director of Operations at Studio Nantwich, said, “We are very pleased to be hosting Arcadia Roots. They are a fantastic band that were really popular at the Nantwich Jazz, Blues & Music Festival last year when they played on The Bank Stage - a large marquee behind The Crown Hotel near the Studio. To have them doing a small up-close and personal appearance in our downstairs The Retro Room is a major result. The band are one to watch as they are playing lots of big festivals again this year. We are sure that this is their year to hit the big time, so come and see them for free and donations are welcomed for Dougie Mac.”
The concert follows the successful appearance of three-piece live party band 'Boomin’ in February, which raised nearly £300 for Douglas Macmillan Hospice - Dougie Mac.
For further information please search Studio Live Nantwich on Facebook. 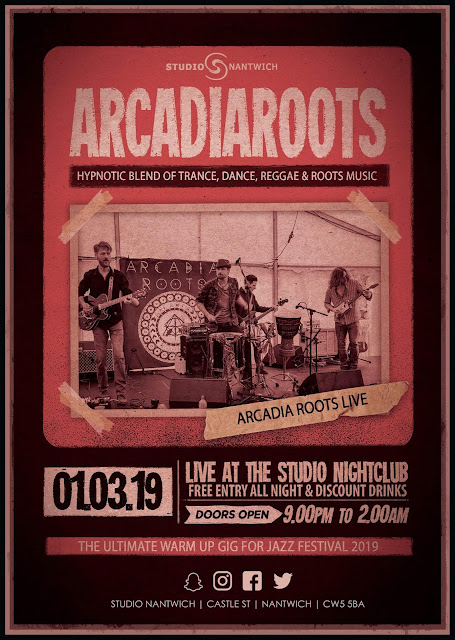