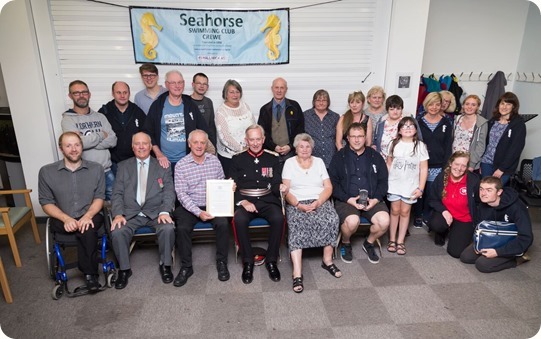 Volunteers at Seahorse Swimming Club have been honoured by Royalty with the Queen’s Award for Voluntary Service for 2017.

The award was made on behalf of the Queen by the Lord Lieutenant of Cheshire, Mr. David Briggs MBE on 7th September at the Lifestyle Centre. The award is equivalent to the MBE and the highest award a voluntary group can receive. It was created in 2002 to celebrate the Queen’s Golden Jubilee.

The voluntary-led group, which cater for people with disabilities, was formed in 1956 at the Flag lane Baths. The aim of the Club is to encourage its members to gain confidence in the water, learn to swim and further develop their skills.

Seahorse volunteers Jackie Roberts and Steph Evanson attended the Garden Party at Buckingham Palace in May with other award winners from across the country, where they were in the company of the Queen and other members of the Royal Family.

Seahorse has over 80 members which include swimmers and volunteers. They meet on Thursday evenings at the Lifestyle Centre. The 25 volunteers of all ages provide a safe and pleasant environment for the swimmers. Their roles vary from assisting swimmers in the pool, encouraging them from the poolside and helping behind the scenes by organizing galas, social and fundraising events.

Joining the volunteers for the presentation was the Mayor of Cheshire East Council, Cllr Arthur Moran and the Mayor of Crewe Town Council, Cllr Diane Yates. John Lea from Mornflake Oats and Rotarians Neil Fearn (President), Ray Stafford MBE and Frank Baldwin were also present to offer their congratulations, as well as several former volunteers, which included Mrs Margaret Platt who is one of Seahorses’ founder members.

“Everyone at Seahorse is extremely proud to receive this award. It is recognition for the commitment and enthusiasm of all the volunteers who have helped out. The Club relies on volunteers and it’s thanks to them that people with disabilities are given opportunities to exercise, socialize, have fun, freedom and a challenge in the water which is often denied to those who are unable to move freely." - Gareth Roberts, Secretary.