Denise & Steve Lawson, owners of the Nantwich Bookshop & Coffee Lounge http://www.nantwichbookshop.co.uk , have introduced a 'Suspended Coffees' scheme to their shop at High Street in the centre of Nantwich.

When a customer buys a coffee (or any other hot drink) they can also pay for a second one - which can then be claimed by someone who cannot afford it themselves.

They don't have to "prove" anything to claim one, but the scheme relies on the good faith of everyone involved.

The Suspended Coffees movement - http://suspendedcoffees.com - began in Italy several years ago, and has already been embraced by hundreds of cafes around the world.

Denise & Steve said, "We are truly humbled by the generosity of Nantwich folk. Since early February this year, when we joined the 'Suspended Coffees' movement, we have had over forty coffees and over twenty teas purchased by customers. We are promoting the scheme to make people aware of this amazing act of kindness. Thank you to everyone who has donated a hot drink." 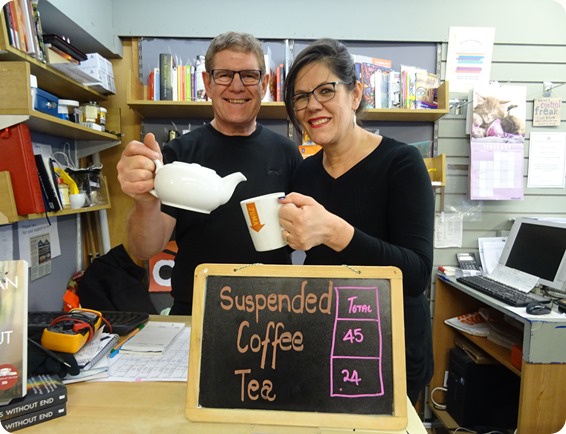