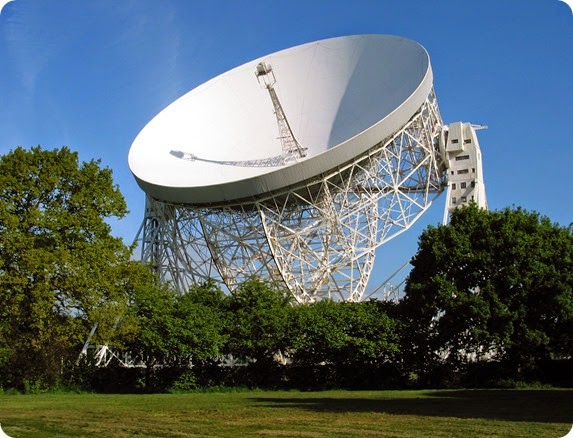 Jodrell Bank has been chosen as the headquarters of the world’s largest radio telescope, creating a huge economic boost for Cheshire East.

The famous observatory will remain at the forefront of global scientific research for another 50 years after members of the international Square Kilometre Array (SKA) project expressed their preference for the site, near Goostrey.

The SKA telescope, said to be capable of looking all the way back to the aftermath of the Big Bang, will spread across two continents and comprise 2,500 dishes and one million antennae.

It is estimated to be worth £1billion in private sector investment and will help to secure an additional 200 jobs on the site.

The news comes days after Cheshire East Council agreed to invest £1m in Jodrell Bank as part of a support package that will focus on connectivity and asset enhancement.

Caroline Simpson, the Council’s executive director for economic growth and prosperity, said: “This is a real statement of confidence in scientific research in Britain and also in Cheshire East.

“The Council believes this will lead to further opportunities in the Cheshire and Manchester region and the Council has set out a clear action plan to develop the technology and science corridor in the area. Jodrell Bank plays a key part in this plan.

“We will continue to work closely with partners across the Manchester city region to develop the site’s record in hosting world-class science and visitor activities.”

Professor Stephen Watts, Head of the School of Physics & Astronomy at The University of Manchester, added: “This is great news for Jodrell Bank. Not only will it mean cutting-edge science will continue to be carried out at the site for the foreseeable future but it will also help inspire the thousands of children who visit here every year from schools across the country.

“It is a great honour to be chosen as the headquarters of the largest telescope ever built.”

Members of the SKA partnership were invited to bid to host the headquarters in 2014. Two bids were received, from Italy and the United Kingdom, both of which were judged to be excellent and suitable for the project’s needs. After consideration, the members expressed their preference for the Jodrell Bank site.

The plan, backed by Cheshire East Council, the Science and Technology Facilities Council, the University of Manchester and Oxford and Cambridge Universities, envisages designing and constructing a unique campus for one of the most inspirational science projects of the 21st Century.

The headquarters will be constructed to meet the needs of the SKA project and there is space to grow if the project requires it in the future.

Established in 1945 by Sir Bernard Lovell, the Jodrell Bank Observatory is a long-established world leader of academic research, hosting high profile research in the field of astrophysics.

The 76 metre-tall Lovell Telescope is the third largest in the world, and is joined by three other smaller telescopes at the Observatory. The telescopes have made Jodrell Bank and the University of Manchester key players in the research of meteors, quasars, and gravitational lenses. During the space race, the Observatory played a leading role in tracking space probes, and is credited with being the first in the world to locate Sputnik’s booster rocket, following the launch of the world’s first artificial satellite in 1957.

The Square Kilometre Array (SKA) project is an international effort to build the world’s largest radio telescope, led by the SKA Organisation from Jodrell Bank Observatory in the UK. The SKA will conduct transformational science to improve our understanding of the Universe and the laws of fundamental physics, monitoring the sky in unprecedented detail and mapping it hundreds of times faster than any current facility.

The SKA is not a single telescope, but a collection of telescopes or instruments, called an array, to be spread over long distances. The SKA is to be constructed in two phases: Phase 1 (called SKA1) in South Africa and Australia; Phase 2 (called SKA2) expanding into other African countries, with the Australian component also being expanded.

Already supported by 11 member countries – Australia, Canada, China, Germany, India, Italy, New Zealand, South Africa, Sweden, the Netherlands and the United Kingdom – the organisation has brought together some of world’s finest scientists, engineers and policy makers and more than 100 companies and research institutions in 20 countries in the design and development of the telescope. Construction of the SKA is set to start in 2018, with early science observations in 2020.

The BBC Stargazing Live series has been broadcast live from Jodrell Bank annually since 2011. It typically attracts around 2-3 million viewers per episode although the 2015 eclipse special attracted a peak of 4.7 million viewers, the highest morning TV audience since the Diamond Jubilee in 2012.