'The Ultimate 80’s Christmas Party' took place at Nantwich Civic Hall on Saturday 7th December 2013. The stage was bedecked with reminders of 1980s such as oversized Rubik's cubes and posters from TV series Baywatch and the movie Back to the Future.

A tribute to Madonna opened the show and warmed up the crowd by singing several of her classic hits from the 80s including 'Like a Prayer', 'La Isla Bonita', 'Like a Virgin', 'Into the Groove', 'Material Girl', 'Borderline' and 'Holiday'. 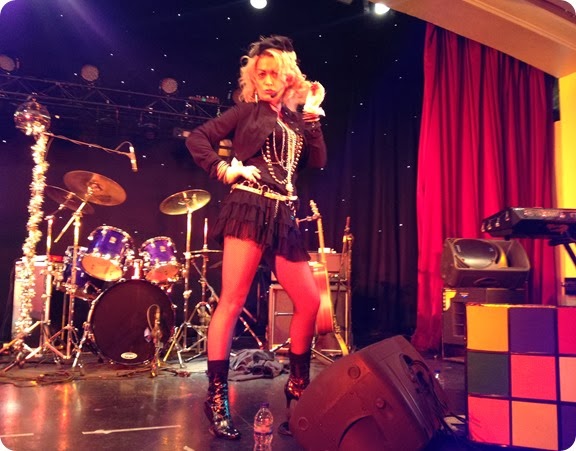 She was followed by live four-piece band 'The Skulls' - http://www.theskullsband.co.uk – who energetically performed numerous classic 80s hits from artists such as Depeche Mode, A-ha, Van Halen, Europe and Bon Jovi. I saw several air guitars in use during the rock section! They also performed modern hit records, along with a selection of seasonal Christmas classics.

Several audience members wore 80s costumes including a Freddie Mercury, a Michael Jackson, an Adam Ant and a Cyndi Lauper, along with several shell suits, tutus and leg warmers.

The audience were encouraged to use Twitter to tweet their photos using the hashtag #80spartynight and official photos will be uploaded to https://www.facebook.com/WarbleEvents .

The event finished with a disco from midnight to 1am.

The tickets were only £10 for this sell-out event and represented excellent value for money.