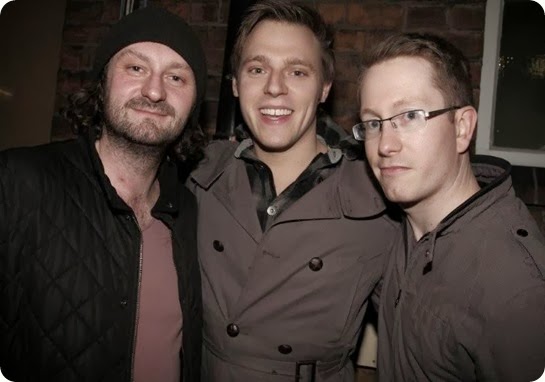 A glorious era comes to an end this Friday (December 20).

For the past five years Crewe’s music scene has enjoyed a real shot in the arm, with some of the world’s finest bands gracing the town’s stages.

And, arguably, much of it would not have been possible if it weren’t for Toby Robinson, head honcho at Volume PR and senior promoter of its regular sessions at Crewe’s premier music venue, The Box.

Whilst Volume will continue to bring some of the best up-and-coming talent and established touring artists to The Box now and in the future, Toby bows out of the music scene with Volume’s Land Stand of 2013 this Friday.

And, after overseeing some 700 gigs, he feels this Christmas was the right time to go. Toby explained: “Running the Volume gigs at The Box is without doubt the best thing I have ever done and I’ve enjoyed it immensely. But, you can hang on a little too long can’t you?

“It’d been on my mind a short time to move on to a new stage of my life and I wanted to go whilst I was still really enjoying it. I never wanted to get to a point where I didn’t get excited about going to work before deciding to jack it in. It means I’ll always look back on it all with fondness.”

During Toby’s reign, the likes of Funeral for a Friend, Hadouken!, Ash, The Twang, The Bluetones, The Joy Formidable and Idlewild have graced the stage at the much-loved venue, on Pedley Street.

Not only has this given Crewe’s night-time economy a lift, it has provided an excellent and long-overdue local platform for some of the town’s talented bands to shine.

And it was not always just about The Box. The Volume Festival, first staged in 2008, has been a regular feature over the May Day Bank Holiday weekend and included a number of bars and pubs throughout the town, providing them with an added boost.

Regular followers of the ‘IndieAtTheBox’ Facebook page will have seen the daily updates throughout December as a sentimental Toby relives his favourite moments since The Box’s first ever gig on Saturday, August 9, 2008.

Toby said: “We’ve had some big bands here, but I got a bigger buzz out of bringing the obscure bands to Crewe, like Dinosaur Pile Up and Future of the Left. The town had never witnessed acts like that before and it was doing something a bit different that motivated me.

“The Limelight, for example, had a great community feel about it and the M Club had the ability to bring the much bigger bands to Crewe, but I’d like to think The Box helped to create an original music scene of its own and hopefully a lasting legacy.”

Toby says working with the likes of Sgt Wolfbanger, Bleached Wail, Sumo Kings and Troops of Mafeking gave him some of his most treasured moments in his quest to put Crewe on the musical map.

“The relationship you build with the local bands is what I love the most – that is how friendships are formed. As much as I enjoyed the nights with the bigger bands, they felt more like a business transaction.

“And it’s always a pleasure seeing the local bands sell out the venue. Kill the Doctor did it, as did Blitz Kids. Occasions like that make it all the more worthwhile.

“I’m going to miss it and I’d really like to thank all the people and the bands themselves who put the effort in to help create a buzz around The Box, they all know who they are.”

Six bands will play at Volume’s Last Stand of 2013 and have promised to send him off with a show to remember. It features a headline slot from Troops of Mafeking with support from Moving Moscow, The Eyres, Forecast, Josh Walker Band and Holly Pender.