On Sunday 15th July Howard Barker and his son Ben Barker (aged 15) completed cycling the 190 mile long Trans Pennine Trail - http://www.transpenninetrail.org.uk/ - from Liverpool to Hornsea. They completed the route in four days and started on the Thursday at the Liver Building on Liverpool's waterfront before heading across England to Hornsea on the east coast. 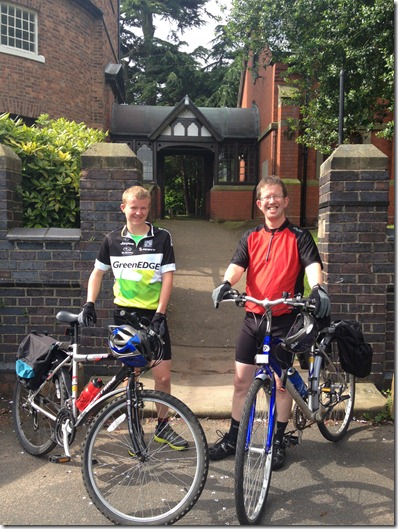 Howard and Ben (who recently completed his GCSE's at Malbank School) are raising money to replace lead stolen earlier this year from the roof of St Mary's Church, Church Lane, Wistaston. A significant amount of lead was stolen and after claiming the insurance the cost of the repairs still amounts to approximately £15,000. To ensure the church is weatherproof for weddings, baptisms, funerals and church services urgent and expensive work is required. If you would like to make a donation, please send cheques payable to "St Mary's Church, Wistaston" to St Mary's Church, Church Lane, Wistaston, Crewe CW2 8HA.

Howard said, "It was a real adventure, good fun but challenging. Ben's music playing loudly as we cycled surprised the other people on the trail". Ben said, "It was an amazing experience that I will never forget, but it was extremely hard because we have never done anything like that before".

They found the route very hard work as neither had done anything like it before. In places the paths were impassable due to flooding with some paths more like streams. It rained particularly heavily as they went over the top of the Trail's highest point at Woodhead Pass. They also had mechanical problems such as brakes not working properly and a slow puncture. They had a great adventure but don't intend to go near a bicycle for some time!