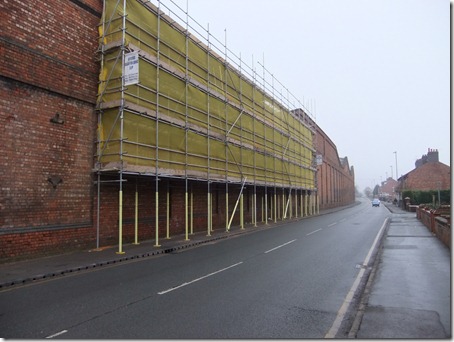 The wall of Crewe Works in West St opposite Minshull new rd has over the past few weeks been falling apart as large pieces of bricks and masonry have been falling on the pavement.  It may well be due to the frost as half the wall was very damp long after the frost and its been crumbling ever since. The wall is very old as is evident by the camouflage on it from the war. They have now erected scaffolding so hopefully repairs are now underway before it gets any worse. The problem with the scaffolding is they blocked the footpath while they were erecting it making it very dangerous as they didnt leave anywhere for pedestrians to walk but into the road they should have made safe passage for them