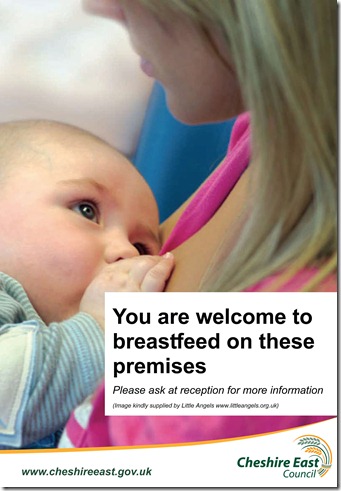 Mums in Cheshire East are being reminded that they are free to breastfeed in all council-run buildings.

A new poster campaign has been launched to tie in with the introduction of the Equality Act on October 1. The legislation contains a section stating “a woman can’t be treated unfairly for breastfeeding her child”.

The posters will be displayed at children’s centres, libraries and leisure centres. Any mums needing to breastfeed should ask at reception.

Staff have been trained to deal with such requests professionally and discreetly and mothers are being reassured that if anyone complains it will be them that has to move, not the mother.

Breastfeeding is regarded as playing an essential role in improving public health and reducing health inequalities.

The mother gains protection from breast cancer, from weak bones in later in life and from ovarian cancer. Also women who breastfeed get their figures back faster.

Levels of breastfeeding in Cheshire East are low but it is hoped this campaign can boost numbers.

Councillor Andrew Knowles, Cabinet member with responsibility for health and wellbeing, said: “The benefits of breastfeeding are well documented and I am sure this campaign will help mothers in Cheshire East.

“Mums can use public buildings free of charge without feeling obliged to buy drinks or food as they would in a café. Libraries in particular are extremely suitable for this scheme as most of them are in the centre of a town.”

Councillor Sandy Bentley, ward member for Macclesfield West and who has played a key role in the project, said: “We need to make breastfeeding less of a taboo, it is after all, the most natural thing in the world.

“I have spoken to several new mums whilst working on this project and they all stated that being able to feed their child in a safe, warm environment would be a real help.”

Image – The new poster which will be displayed in council buildings.