A talented local rugby player has been chosen to receive training at an elite level club. 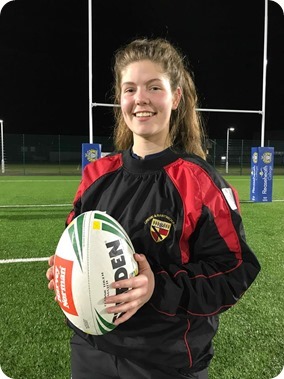 Christine Lawson, aged 17 from Crewe, started playing rugby only two years ago. She was born in South Africa and was inspired to play by her father - Steve Lawson - who regularly participated in the sport when they lived in South Africa.

Christine currently plays on the flank for the Ladies XV team at Crewe & Nantwich Rugby Union Football Club, who play their home matches at the Vagrants Ground in Willaston near Nantwich, in the National Challenge North West 1 league.

She is also a member of the Cheshire RFU Senior County Ladies team, who train at Winnington Park, near Northwich, having played several times for Cheshire RFU Under 18s.

In late February this year she attended a trial for Firwood Waterloo Ladies RFU team in Bootle near Liverpool. As a result, she has been picked to receive training at the club’s centre of excellence at Litherland Sports Park. Firwood Waterloo Ladies play in the Tyrrells Premier 15s, the top tier of the women's English rugby union domestic league system. The club also has links with the England Women’s RFU setup.

Christine said: “I am very glad to receive training at this high level. I also thank the coaches and players at Crewe & Nantwich Rugby Union Football Club who have helped me get this far."

Matt Baty, Ladies Coach at Crewe & Nantwich Rugby Union Football Club, said: “Christine was forced to play at a different Club last year due to the lack of players in her age group at Crewe and Nantwich. Fortunately, this year she has been able to play up to the Over 18s due to a change in the league regulations and has slotted right in! It can often be a big step up from juniors to adults due to the difference in the size and physicality of the players, but Christine has been one of the first names on the team sheet since the start of the season. She has a very bright future in the game and we’re very lucky to have had her at Crewe & Nantwich RUFC this season”.