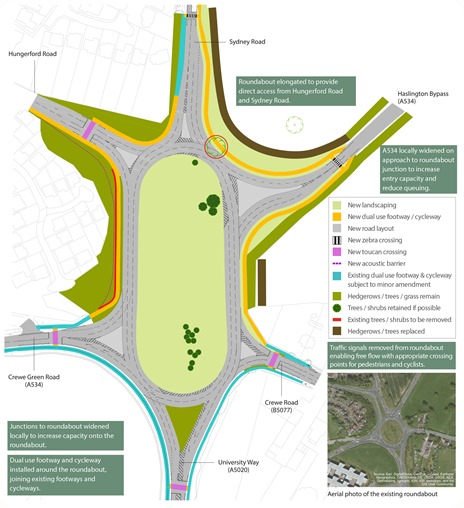 Work is about to begin on another major highways improvement scheme for Crewe.

The £7m Crewe Green Roundabout scheme, by Cheshire East Council, will start later this month and residents, businesses and anyone wanting to find out more about the project and the work involved, can meet the contractors at an event in Crewe on 18 January.

Reshaping the roundabout and removing traffic lights – together with other highway improvement features – will make a significant impact on one of the town’s most frustrating travel pinch-points, increasing traffic flow, while injecting a further boost to the local economy ahead of the arrival of HS2 nine years from now.

It will also ease the journey for people travelling in and out of Crewe at a time when the council is pressing ahead with ambitious plans to transform the town centre, with an ambitious regeneration scheme based around the Royal Arcade.

Councillor Don Stockton, cabinet member for environment, said: “This is a scheme that will have an enormous beneficial impact on the local economy and which will significantly improve journey times for motorists and commercial traffic.

“We have long recognised that the existing road layout did not meet today’s demands and we are confident that the new scheme we have designed will contribute to the enhanced M6-Crewe corridor.

“The council has invested considerably in securing investment in highways schemes in Crewe – the £26.5m Crewe Green Link Road (David Whitby Way) and the £7m Basford Spine Road (Jack Mills Way) have been completed recently as well as improvements to the A500 at Junction 16. In addition, funding has been obtained to work up proposals for the ‘dualing’  of the A500 between Crewe and the M6, estimated to cost £57m.

“I would like to thank those residents, motorists and other organisations who responded to the public engagement process and who helped the council to achieve a design that satisfied the planning board and which will create a fresh and pleasing approach to the town, rather than the bottleneck we are faced with today.

“I would also like to thank our residents in advance for their patience and appeal to them to bear with us during what is going to be a period of disruption.

“This is an extremely important project for Crewe but we know there can be no gain without pain and so we hope to minimise disruption and deliver a new road scheme that will help to drive forward the economic growth of the Crewe sub-region and contribute towards the business case for a major high-speed rail hub station to receive HS2 trains by 2027.”

The new road layout will see the existing roundabout become more oval shaped. Traffic lights will be removed and wider junctions created so that traffic can merge from different directions. Shared cycleways/footways, with crossing points for cyclists and pedestrians, form some of the features to be included in the scheme.

Funding will come from the Local Growth Fund, the National Productivity Investment Fund and developer contributions.

Philip Cox, chief executive of Cheshire and Warrington Local Enterprise Partnership, said: “This is an important step forward to deliver vital road improvements in Crewe that will make a real difference for local residents and businesses and ensure that Crewe has the right infrastructure as plans for HS2 progress.”

The work is scheduled to take approximately 10 months, after which the council intends to press on with the long-awaited Sydney Road Bridge improvement scheme, which will remove another bottleneck and improve journeys to the north of Crewe, including Leighton Hospital.

Contractors Balfour Beatty intend to stage a public event so that anyone wishing to learn more about the programme of works and the overall project can meet with them and discuss any concerns and ask questions. This will take place on 18 January at The Hunters Lodge, Sydney Road, Crewe, from 2pm-8pm.

All information about the works can be viewed by visiting: www.cheshireeast.gov.uk/crewegreenroundabout