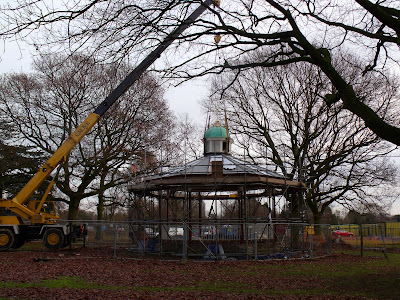 Monday saw the return of the Bandstand dome from being restored off site. It looked very good with the top done in gold leaf. The main posts have been restored and put in place and much of the roof has been done. The bandstand should now be finished in January 2010. Full details and more pictures on the main Queens Park Website The first bridge was due this week but has been put off until January but the whole park is moving a head at a great rate of knots.
News the play area has been moved forward after public concerns and should now be rebuilt by Easter. Plans are in for the new cafe and work could start by march next year. The Boer war memorial base is to be dug up as the old base is buried under it and this will be restored along with the guns
Posted by Jan Wright at 23:28