Seahorse Swimming Club, for people with disabilities, recently held a fun swimming session followed with a disco at the Lifestyle Centre to remember Michael Roberts (Mick), one of Club's long serving volunteers, who passed away in December 2018 aged 74 years. Mick started volunteering at the Club in 1965 as a helper in the pool. He took on various roles within the Club, including as Chairman and as a poolside supervisor.
Mick spent most of his working life as a railwayman, starting as an engine cleaner, and then becoming a fireman, before advancing to become an engine driver. As well as volunteering at Seahorse, Mick gave up his time to support the railway charity to help railway veterans. He'd also helped out in a voluntary capacity at the Emmie Dixon Centre, a residential home for people with learning and physical disabilities, and was also a member of the Crewe Male Voice Choir. In 1996, he was awarded the British Empire Medal for services to the community and during 2003/03 he served as the Mayor of Crewe and Nantwich.
“Mick loved spending his time at Seahorse, where he always encouraged the swimmers to try their best, while having fun at the same time. He would have been over the moon knowing that everyone was having a great time as a way of remembering him. It was also pleasing that Mick’s wife Ann and his daughter Diane joined Seahorse members at the Lifestyle Centre to remember him.” – Gareth Roberts, Secretary. 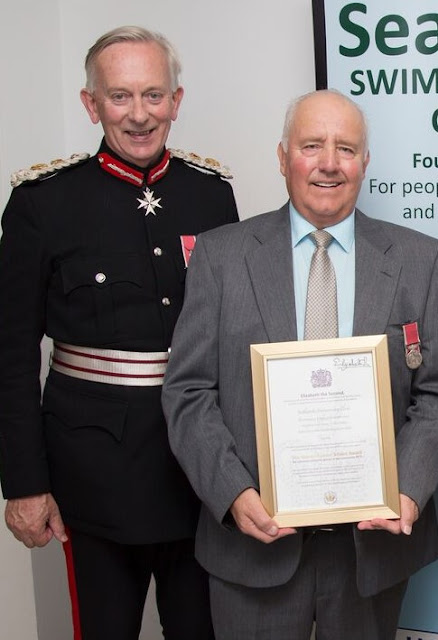